Showing posts from 2017
Show all

- September 28, 2017
If you are a Minnesota Twins fan, then you are probably celebrating from their postseason clinch, but we have to remember that the real challenge hasn’t even begun. The Twins will likely face the New York Yankees in the wild card game for a chance to advance to the ALDS. The Twins current roster has 34 players on it. So we will break down who they should bring and who they should leave back in Minnesota. I’ll start off by saying that the roster can be changed after the wild card game meaning the Twins don’t need to bring all the pitchers that they will use in the postseason, but just the ones they might use in this game. For example, Kyle Gibson will likely be left off the wild card game roster despite him being one of the three best starters on the team. Now that that’s settled, Jacob and I have compiled a list of locks, and then we each have our own separate list of remaining players to be added despite their holes (Bagels, get it? Like bagels and… nevermind.) Here is our lis
Read more

Twins Farm System: The Other Guys

- September 24, 2017
The Minnesota Twins have a solid list of prospects, but the bunch looks weak compared to the Byron Buxton , Miguel Sano , and Jose Berrios days. If you were to look at any of the current guys at the top of the Twins prospect list right now, you might see names like Nick Gordon , Royce Lewis , or Stephen Gonsalves , but what you don’t see are some very talented and very underrated players that are going to be helping the already formidable and already young Minnesota Twins team very soon. Two things I would like to stress about this article are that I will not be focusing on every lesser-known young player and contributor, and also I am not taking away anything from the top tier prospects in the organization. The first player that I’d like to focus on is LaMonte Wade . Wade spent the 2017 season in Double A Chattanooga and had great numbers with the Lookouts. He is currently ranked as 17th on MLB.com’s top 30 Minnesota Twins prospects list. He has shown the ability to hit t
Read more

One Month of Saint Paul Saints

- June 28, 2017
It has been a while, but I'm back to give an update as to what we as a company have been up to for the past two months. Leading up to the beginning of the St. Paul Saints season opener, we had to do a complete overhaul of our statistical models. We had a breakthrough wherein we found a much more accurate way of representing a player's production, while also simplifying the process of calculating these values. We scrapped the manual entry of data and replaced it with a predictive formula and program that does it for us. These changes, as well as a very busy late-May and early-June, are why we have disappeared for the past few months. In the future we will try to post updates on a weekly basis, as well as updated stat sheets and box scores following every remaining home game. You can find all that at our twitter . Now onto our findings. So far this season we have stuck to Offensive statistics, because the transition from MLB stats to American Association stats took a bit to tra
Read more

A "Brief" History of Sabermetrics

- April 27, 2017
Baseball has been the best example of sports resisting change throughout it's history. Baseball's detractors cite this as the cause of its slowly decreasing viewership. There have been spikes in interest such as the 'Steroid-Era' when long ball hitters like Mark McGwire, Sammy Sosa, and Barry Bonds drew hundreds of thousands of fans a year to watch seemingly impossible amounts of home runs. But sadly, in terms of TV ratings, the league cracked down on PED's and things began trending down once again. The MLB needed a big, new way to revamp how the game is played. Most people would consider this decline to be the beginning of advanced statistics in baseball. What most people don't realize, is that this movement started nearly fifty years ago, but nobody paid it any attention. In 1952 Topps first added baseball statistics to the back of their cards. The majority of these were very basic statistics, often called the counting stats because no calculations have to
Read more

- April 27, 2017
With March Madness over and summer coming nearer into focus, we are going to switch our main focus over from Gophers basketball to baseball. We will be covering the Minnesota Twins and the St. Paul Saints this season. We will also be doing general write-ups about the statistical research we are doing, as well as statistics based stories from across the baseball world. This weekend we will have a brief history of advanced baseball statistics and a look into their future possibilities. Stay tuned.
Read more

Gophers Season Wrap-Up and Looking Ahead

- April 19, 2017
March Madness Well Gophers fans, the season didn't exactly end on the most fulfilling not. The loss to Middle Tennessee was a result of lots of very unfortunate coincidences. The first, and most obvious of these was the untimely injury to senior graduate transfer Akeem Springs. MTSU's stifling zone defense had only one flaw: Three Point Shooters. Without Akeem Springs' shooting ability the Gophers were forced to stay away from outside shooting. All the inside play led to foul trouble for senior center Reggie Lynch, although a few silly mistakes didn't do him any favors. Another major factor was the tournaments seeding. As practically any sports fan in the Minnesota-Wisconsin area heard, there was some controversy involving which teams were over or under-seeded. Wisconsin, who beat the Gophers twice in the regular season and who also went further in the Big Ten Tournament, was given an 8 seed. The Gophers were given a 5 seed, and we're matched up against a team tha
Read more

- March 05, 2017
We are very sorry that we at MN SSA have not posted any traditional articles recently. As part of our attempts to grow the website as well as our overall presence we have been focusing primarily on the design of the website, and also building a strong following on social media. This has entailed very large amounts of time working with our website developer, Steven Wagner, to make sure that the new site design is optimized for your viewing experience. The new and improved website will be launched within the next few weeks, along with a totally new URL. An update will be posted once everything has been worked out logistically, but until then we will continue to post everything to this site. In regard to our social media, we want to remind you that we are on both Twitter and Instagram and we will include links to both of these accounts below. Something new that we have worked on for the new website is a bracketology section, which we have created a rough prototype of. You can access the b
Read more 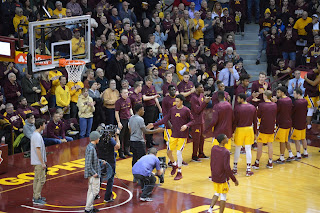